The "fight for Air Climb" was yesterday. I really live this event but boy oh boy every year I forget how hard it is to go up 789 stairs. It really takes a lot out of a person but totally worth it and it is such a wonderful cause!!! Here is a picture of me after :) 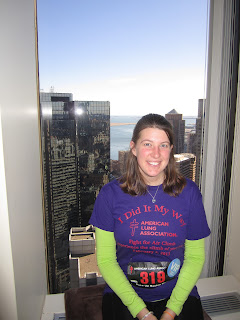 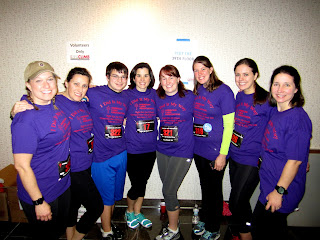 A view from the top! 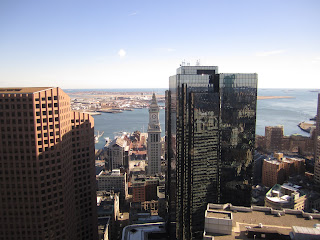 What is truly moving is to see all the fire fighters from all over New England show up in FULL gear and run to the top. (I couldn't do it) 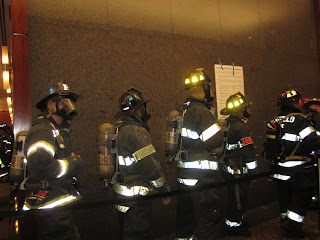 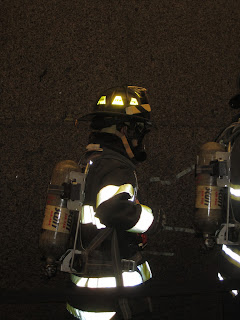 Another view from the top! 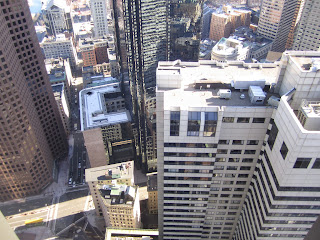 I want to say a HUGE thank you to everyone that donated to this wonderful cause!!!! xoxoxo
Posted by Bill and Jennifer at 4:04 PM No comments:

This weekend I ran my first marathon in Newport Rhode Island!!! If you don't know a Marathon is 26.2 miles. I have to say Newport is a gorgeous area but boy oh boy is it hilly!!!!! I loved running through this ocean town  with lots of cool views and the biggest most beautiful mansions I have ever seen!  It was an awesome time and I feel blessed to have been able to do it with out injury!  If you were to ask me yesterday I would have said NEVER AGAIN but today I am saying hmmm maybe!

My shirt and map! It was cool because I would be running and people on the sideline would cheer for me because I put my name on the front...also other runners commented because of what I wrote on the back (26.2 because 26.3 would be crazy) and that would turn into a conversation...and we all know how much I like to talk. Really helped to pass the time. 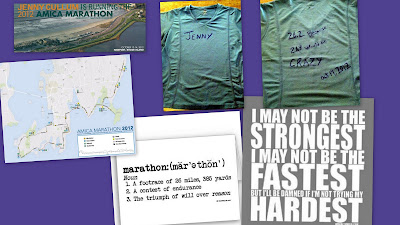 Some views. I really did want to take more pictures but I was enjoying the views and just plain forgot or the pictures came out blurry :( sorry! It was SO SO SO windy and we were beaten up by the sand! When we were at the start line it started to rain a little but we were quite lucky that it never rained. I was wicked worried about that :) 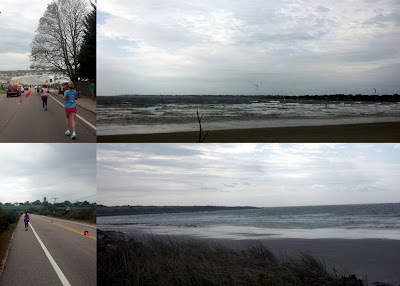 My baby at mile 15!! Bill and I had made a plan to meet at the half way point (13.1) but when I got there Bill and Chase were not there. It was crowded so I just figured they got stuck in traffic or could not find it. I was totally bummed...then I turned the corner at mile 15 and there they were!!! I could not have been happier! I stopped and hugged them both and chatted for a couple minutes :) Seeing them was the boost I needed to keep going! 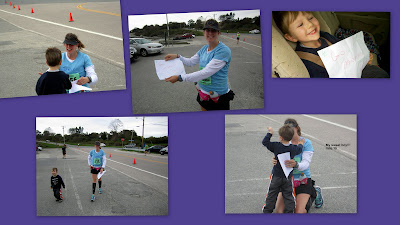 I took a few pictures of mile markers! Tell you what I never really hit a wall but I did hate running between 18 and 21. I feel lucky because I only had minor aches and pains: Tail bone area was really tight and my left Achilles was tight and achy  but nothing that made me feel like I had to stop!!
fun fact: I decide to enjoy my run and views so I ran with out music all the way to mile 18 and only listen to it to mile 24. It was really cool! ALSO, I have never ran with out my GPS watch to monitor my pace and distance but when I woke up and started getting ready my watch battery was DEAD!! I was so upset but as I was running I feel like it was a blessing because my pace and time was one less thing for me to think about. I am sure it affected my finishing time and was one of the reasons I finished a little slower than I wanted but it was nice not to worry about it at the time. 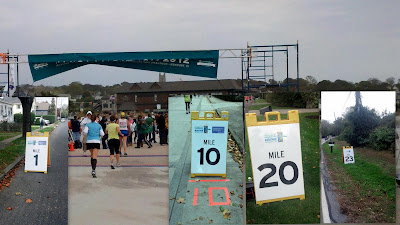 A few pictures of me running. I was VERY surprised by how hilly this run was. Everyone told me it would be but I just did not expect this. I just need to learn that these beach towns ARE HILLY! my half marathon a few months ago on the Cape was hilly too. Between the Hills and the heavy wind I just could not go much faster. 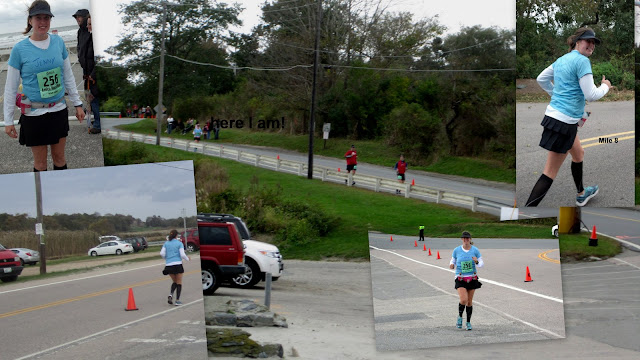 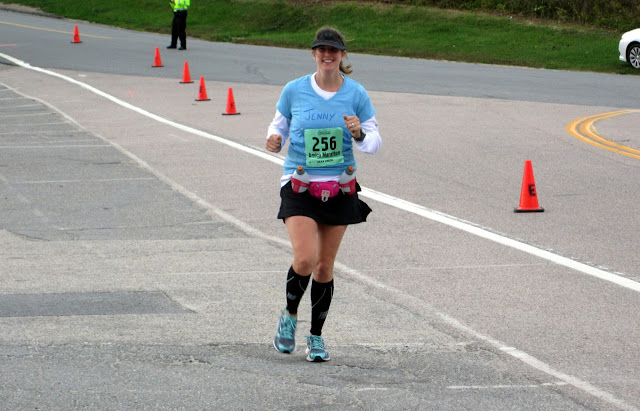 Finished and so happy!!! This was an amazing experience and I feel very lucky to have been able to do it. 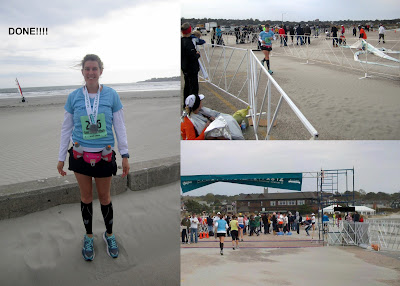 After the Marathon Michelle and I went and got a yummy cheese burger and a beer before coming home. I swear it was the best burger I had ever had. hehe

4 more days until the Marathon. I feel ready but really nervous and scared. I do feel a cold coming on so I really hope that passes before the big day. Just checked the weather for Sunday and it says low of 56 and high of 63 Sunny which in my mind is PERFECT!!! To tell you the truth I can't believe I signed up to do this as I never saw my self as a go getter... wish me luck...26.2 miles on Sunday.
here is the course map. GOING TO BE A GORGEOUS RUN!!! 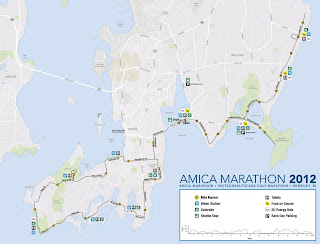 Posted by Bill and Jennifer at 11:01 AM No comments:

Spirit of the Marathon

I watched this documentary the other day while running on the treadmill. WOW! What a motivating movie right before I run my own Marathon. It is about 6 runners, a couple running a marathon for the first time to Elite and Olympic Marathoners. It shows challenges and triumphs.
Posted by Bill and Jennifer at 1:42 PM No comments:

Yesterday was my last "long run" before the marathon. I am now suppose to do "short and easy" runs. I have 13 days until the big day and I am very nervous since my 20 mile run went so badly due to being sick. I seriously can't believe I am going to run a Marathon...
My goal is to finish in under 5 hours other than that I just want to have fun and enjoy my self. 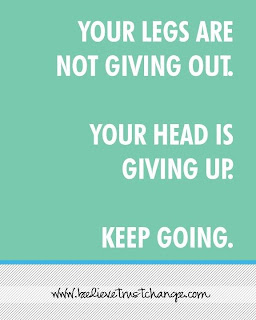 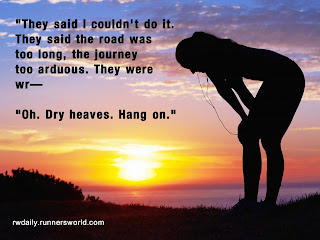 I am always surprised when someone calls a 5k (3.1mile) a marathon :) 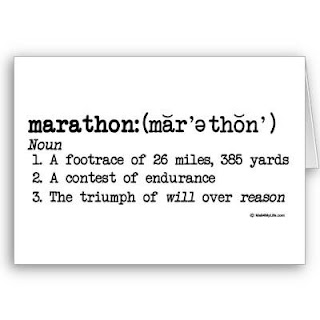 It will be interesting to see how I feel... 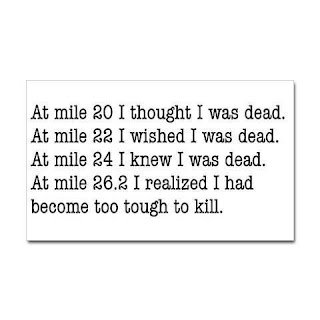 Posted by Bill and Jennifer at 1:31 PM No comments:

Last weekend I did the Diva Dash. it is 3 miles with 11 obstacle courses. Though I did have fun with my friends doing this I was disappointed. I found it to be too easy and I really wanted to be challenged...and MUDDY! I might do this again just to do with friends but I really hope they make it more difficult and dirtier. Here are a few pictures. 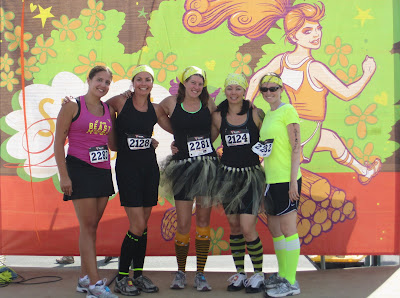 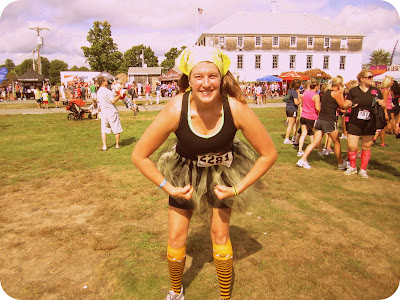 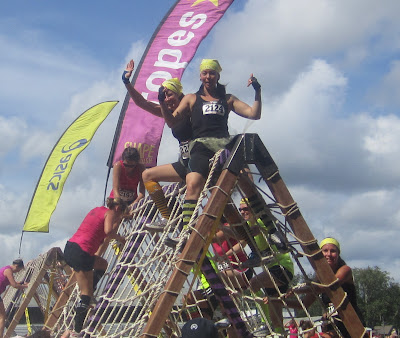 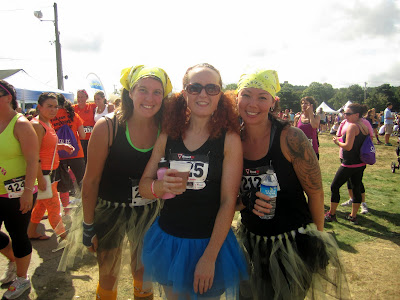 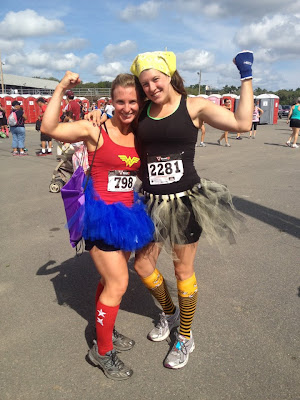 Posted by Bill and Jennifer at 5:17 PM No comments: